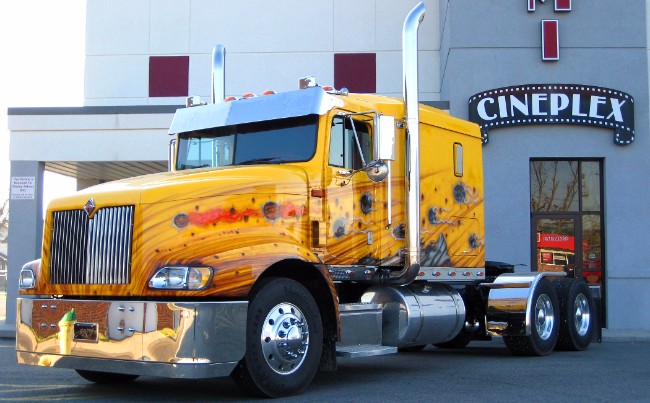 In the meantime, these truck drivers are finding their loads on auctions such as the ones that are conducted by uShip. In fact, uShip is considered to be the world’s largest online auction house which is constantly being used by independent truck drivers.

To put it in perspective, the auctions that take place on uShip are in fact done as a reverse auction format, that is to say, the carriers are engaged into placing bids on one or more jobs that have been listed.

Nevertheless, the clients during these auctions have an option and opportunity to give awards, either to the lowest bidder or to higher bidders, all that can be done by previously given feedbacks.

Only after a carrier wins a bid, only then he is allowed to load his truck and to start the load transportation process.

This reality trucking TV show is without a doubt one of the best trucker shows, it is well made, and it is easy to watch.

Trick My Truck was created by Varuna Entertainment; the premiere of this reality was back in 2006. As one of the 10 best reality trucking TV shows that were ever filmed in USA, Trick My Truck is featuring a group of vehicle hackers that are renovating trucks.

Thereupon, the vehicle hackers or better known as “Chrome Shop Mafia” have made this trucking show in order to help, or better said to give a chance to truck drivers that cannot afford renovation of their trucks. So how do they take action?

The “Chrome Shop Mafia” is receiving letters, as well as calls from truck drivers’ relatives and friends, and based on the content of those letters they choose which truck driver out of them all should get a truck renovation.

Straight after the “Chrome Shop Mafia” decides which one of the truck driver candidates is going to be the one that is going to get a truck renovation, they contact them and give them similar loaner truck whereas they take his truck for remodeling.

Hence, the vehicle hackers are remodeling candidates’ truck completely with customized designed themes as well as with electronic enhancements (including tires, exhaust pumps, and so on.). At the very end of each episode, the hackers are showing the remodeled trucks to their clients.

Well, I would like also to add up that these hackers are not remodeling only tractor-trailers, but also dump trucks as well as ice cream trucks.

Thereupon, ITR Deadliest Roads is filmed by the help of America and Canada’s toughest and most experienced truckers.

These truck drivers are driving through the highways of India.

Each day that they are spending on the deadliest roads represents a struggle for them. All that these truck drivers have left to do is to adapt to each road and to every condition.

Not only that these truck drivers are only facing with one of the most deadly roads in the world, but also they have to adapt to the cool temperatures that come to over 115 degrees, and to stay warm in freezing temperatures.

To enumerate, this is for sure one of the most intriguing reality trucking TV show that is interesting to watch.

In this reality trucking show you can get closer to the problems and challenges that truckers in Australia are facing every day. The main focus of this show is on selected truck drivers.

Moreover, the truck drivers that are engaged in Outback Trucking are great story tellers, they are sharing their experiences altogether with their everyday routines.

Not to forget, the people that are engaged in this trucking show are in fact the drivers of one of the heaviest and least manoeuvrable trucks in Australia and in the world.

Each time that these truck drivers enter in their truck cabins they are putting their lives in danger, but still they have gained enough skills to be able to face everything that this lifestyle brings them.

World’s Toughest Trucker is among the 10 best reality trucking TV shows, it was premiered for the first time in January 2012 on Channel 5.

Therefore, in order to motivate more the truck drivers that are in the contest the organizers of World’s Toughest Trucker have set a winning price of US$150,000 altogether with the title of world’s toughest trucker.

Well, speaking of that, the truck drivers in this reality show were challenged to navigate a lot of routes in numerous countries, such as in England, Scotland, Canada, Australia, Brazil, Mongolia, India and so on.