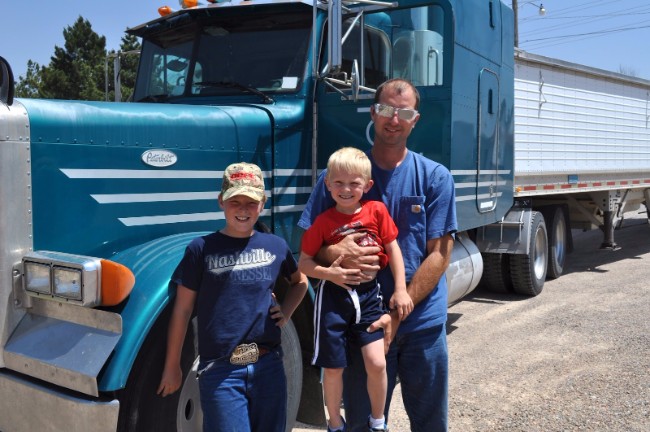 Most people just assume it arrives a la Santa and poof the shelves are stocked. Actually the trucking industry is the lifeblood of our society, without it, we would cease.

2. All truck drivers are crazy maniacs

Ok, yes there are a few bad apples, but when your numbers are in the millions some oddballs will make an appearance. The vast majority of truckers are good people. They are just doing a job the same as any other hard working person.

Sometimes they are the first ones to call for help when there’s an accident. But, movies and other pop-culture references have made the trucker out to be some kind of psycho.

Again, yes there are those who don’t practice proper hygiene as they should. But truckers are like everyone else, they don’t want to be all smelly and nasty.

Most of them keep their cabs tidy, and the truck mattresses are free from bedbugs. After all most truck stops offer showers and laundry facilities and there are many other trucker amenities, it isn’t like it was twenty years ago.

Heck, now the trucks can have bathrooms in them!

4. Truck drivers are unsafe and cause the most accidents

This one gets old. It stems from a few things. People not being educated on the industry, movies, and the speed craze back in the 70’s. Yes, there was a time when drivers would drive as much as they could and do whatever it took to keep that truck moving. I am sure some still do.

But now there are a lot of rules and regulations and they are whole lot tougher now than they once were. There are strict rules about hour of service, issued by the Federal Motor Carrier Safety Administration (FMCSA) that every truck driver must obey.

The most recent stats say truckers are 3 time less likely to cause a truck accident than anyone else.

Ok, some do feed the stereotype, admit it you know it’s true! But actually truckers are not stupid.

You need to have some brains in order to get the job done, to understand the truck routes, to deal with people, to drive safely and keep a clean and good safety rating, to handle loads, and understand all the crazy government regulations.

Truckers actually have more culture than most, and there are so many well educated truck drivers! They are well travelled and have worked in all kinds of environments. They can think on their feet (nothing is like trying to stop a heavy load on an icy road with other drivers on it!).

Driving in winter conditions is another thing that requires driving skills and common sense. Do you think that someone who is uneducated will be able to deal with that kind of trouble on some of the most dangerous and disastrous roads in America? Heck no …….. you again need a lot of brains!

Now A Few Facts About Life As A Truck Driver

Ok, so we touched on and hopefully debunked some of the more common misconceptions regarding life as a truck driver, and perhaps even the overall industry. There are a lot of good people who work in this field, perhaps they aren’t all truckers but they are an important part of our economy.

After all, it is estimated that the USA has several million truck drivers. And as I stated above (and in previous articles) they are the ones who keeps America running.

They deliver everything from the food we eat to the toys we play with to the components that assist us both at home and the in the work space.

“You just name it, they brought it!”

But, there is a bit more to it than that. There are a few negative aspects in regards to life as a truck driver.

Well surely you had to know it can’t all be sunshine and fun. So of course there are the weather related issues. As a driver you will have to deal with hot summer days and freezing winter nights. And let’s not forget high winds, rain, ice, sleet, snow, and even tornado’s and hurricanes!

But do you know what the real predator is to a truck driver? No, it’s not the law enforcement agents and not the competition. It’s the other drivers who ‘share’ the road.

Another thing the truck driver recruiters fail to mention is the unpaid labor. “What”, you ask? But yes, there are times when you don’t get paid; now this will of course depend on the carrier you work for and if you get a salary.

But if you’re like most, you are paid per load or per mile. What do I mean by unpaid?

Of course there are more examples but these are the most obvious.

Life as a trucker is not always what one expects. Therefore you really should speak with your family before pursuing it because there is the time on the road to consider. Most companies try to get you home between runs, but that might not be a guarantee.

Life as a Truck Driver – Balance Between Highway and Home was last modified: May 4th, 2017 by Jurica Magoci