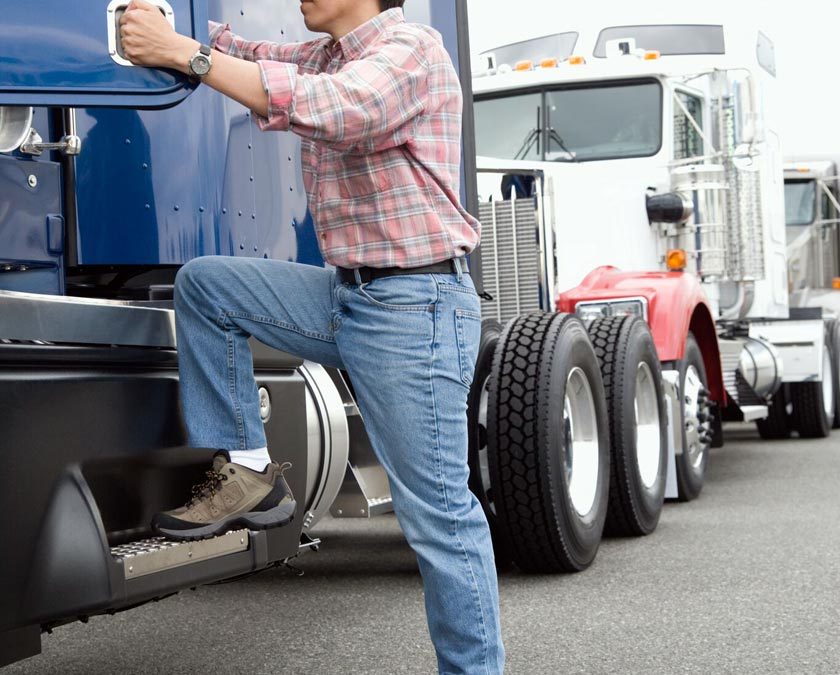 Things were really bad in Poland at that time, so he had the choice to move to Canada, South Africa, Australia or the United States. He left and migrated to the United States, where he decided to stay forever. Therefore, in 1985, he immigrated with his wife to Massachusetts, with the help of a Polish church.

He did not have any trucking experience back then. So, it did not even occurred to him to drive a truck. Therefore, he tried several different jobs in order to make a living. At the time, his wife went to school, whereas he was switching jobs, until one day he heard that driving was very well paid.

During the week he was working on construction sites and during the weekends he would go to the driver training school. In 1986, a year after he came in the United States, he got his commercial license. Firstly, he started with hauling gasoline for a small operator in Massachusetts, Rhode Island and Connecticut.

It was a good job, so he spent 11 years in the company. The company he worked for grew slowly. Thus, he obtained a Green Card and applied for U.S. citizenship.

However he said to himself, why not try something else? Something more challenging, when he does have the possibility to do so.

So, he decided to do it and start as owner – operator. He bought his first truck in 1997, a 1995 Peterbilt. Later on, he signed as a contractor for a small chemical hauler. That same hauler a several years later was bought by Dana Companies. Nowadays, they are providing different  tanker services throughout the eastern half of the country.

These days, Pekala’s routes take him through New England and occasionally up to Canada. He is covering roughly 2,500 miles a week and gets home every two or three days a week.

Today, he hauls “whatever is liquid”. Thus, including hazardous materials, oils and resins in the company’s tanks.

He always says, managing his business begins with managing his costs. Using a company fuel card to get the volume discount is a good way to get fuel while owner – operating.

He says: “They’re a big company and are getting a much better deal than I can do myself.”

Furthermore, his tolls are reimbursed. So, whatever fuel surcharge happen, it gets passed through to him.

His way to control fuel consumption is to keep the speed to 60 or 62 mph – that is as he says his sweet spot. Also, he is using a Webasto heater on cold days. Which means he won’t have to idle the engine. Moreover, New England summer nights are cool, so he does not run the air conditioner. These are all tricks of a long trucking experience.

In general, he is covering roughly about 100,000 miles a year. His tractor is still new so he does not have big maintenance problems. In case there is a problem with the truck, his years of trucking experience gave him the benefit of several ties to many local repair shops.

In case he has a scheduled maintenance, he usually drops the tractor off overnight. In general he goes to a 24-hour dealership in Shrewsbury. And that is just a couple of miles away from home. Then he picks it up in the morning, and he’s off and running.

Whenever he needs oil change, he does it at truck stops. Usually, he uses TA and Speedco, because of the good service and prices.

The way he gets paid is by the load. So, the loads come to him from the company dispatcher. Generally, he calls in twice a day to report the hours-of-duty status.Thus, the dispatcher shows him the next trip he needs to do.

The way he works is to take the loads as they come. He says “I’ve been a long time with this company and they help me, I help them. If they have a load to where I don’t want to go, they also have a load from there that will take me home.”

However, his biggest worry is the increasing cost of running the business, which happens all the time.

He says “In trucking, everything is related to the price of oil. When oil goes up, basically everything goes up – tires, parts and labor because repair shops have to heat.”

Today, Pekala is 51 year old, with huge trucking experience. But, he is now starting to think about what he can do next. He says “I’ll tell you honestly, I don’t know how much longer I’m going to drive a truck – to the end of this truck, at least.”

You got the chance to read the true, realistic story of one owner – operator. A trucker with a wide trucking experience. You could read all about his struggles to get to where he is today. Additionally, he told us about all the good and the bad sides of it.

If you are considering to start with trucking, meaning you are new at it, everyone would advise you to start working for a company. So, later on as you get bigger trucking experience you can go to the next journey. Which is the owner – operator’s journey. It is a hard one but it is worth it at the end.

The benefits are endless, however there are some tricks you need to learn about it. It all comes with time, so no need to rush. Every owner operator have struggled and went through a lot before they become what they are today.

The Real Trucking Experience of One Owner Operator was last modified: August 15th, 2017 by Jurica Magoci