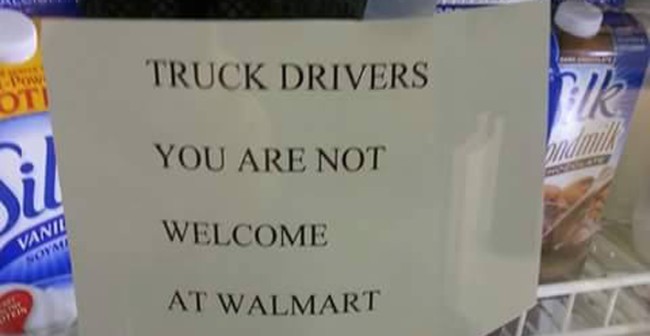 And finally the most important aspect: according to Truckers Against Trafficking (TAT), many of those people taking advantage of the truckers’ lifestyle by ‘offering company’ are not willingly doing that , they are sex slaves!!!

According to TAT, the National Human Trafficking Hotline  has been called by truckers approximately 1,110 times!

According to The National Highway Traffic Safety Administration (NHTSA), parking lot truck accidents account for a large percentage of pedestrian related incidents, with estimates being as high as 22 percent, in regards vehicular accident involving vehicles and child pedestrians.

25% were cause when at least one vehicle was backing. The NHTSA has conducted many studies and even made recommendations to help avoid accidents. For more information regarding the avoidance of accident check out the DOT HS 812 312.

So, I am saying all this to say that is no wonder why there might be some accidents and safety concerns that people have, one of the possible reasons why this Truck Drivers Not Welcome at Walmart sign plagued our media last year!

That is not to say that truckers are criminals nor is it saying truckers invite such an element, at least not on purpose.

But those of the criminal persuasion seek easy targets. Large trucks tend be such a target, especially when the driver is parked on some truck stop or parking lot at the store, and is asleep.

Seals and locks can be broken and cargo taken.

Truck’s tool boxes and such can be broken into and if you don’t have a fuel anti-theft and anti-siphoning system your fuel can be stolen.

But, they will also target other vehicles in the lot, so people are cautious and don’t want to risk the chance, just because they are using the same Walmart store as the trucker, at the time when crime occurs!

People using pollution and saving the environment for everything these days. Regardless how you stand on the issue no one likes pollution. But it is one of the buzz words of our generation and it isn’t going away anytime soon!

So what does that have to do with truckers? – When people see the big trucks the first thought isn’t, “Cool new inventory has arrived”, unless you’re the manager!

People think of the burning diesel fuel, the smoke spewed out the tailpipe and the truck exhaust.

They also think of the noise. Yes, noise is also pollution, and most communities have ordinances against it.

8. Loitering is Not Allowed

You might not think of parking your truck so you can rest as loitering, but technically it can be considered as such.

Loitering is generally defined as remaining in a one place that is not your own, for no official or other legitimate reason.

So if you’re parking your truck and not making a delivery or pickup and you are not shopping, you technically have no reason to be there.

People in most communities are considering  loitering as a crime! Loitering is usually a misdemeanor, but can include fines and even jail time.

You might not think about this but often parking lots are not designed to handle that much weight at one time.

Now sure you see a dozen cars pass by there all day long. Keep in mind they don’t weigh as much as your truck and trailer individually much less when counted together!

Then you add the additional weigh of the freight they are hauling and many lots just can’t handle it. It is very expensive to build and pave parking lots; the annual upkeep can be costly as well.

So of course they don’t build them to withstand the added weight of a loaded semi truck and heavy duty trucks.

Hollywood movies and TV shows representing truckers as bad or even evil people!

Unfortunately when it comes to writing books, films, and shows truckers are an easy fit for the ‘bad guy’.

They are loners who travel the open road, so obviously they are all serial killers and harass their fellow travelers. Wrong, wrong and wrong!!!

They are often present as lawless havoc makers like on the trucking movies ‘Smokey and the Bandit’ or ‘BJ and the Bear’ that constantly fight the police.

Or they are the just rotten like ‘Duel’ or ‘Joy Ride’. Sometimes just as jerks like in ‘Thelma and Louise’.

We know that isn’t the case, but if they showing it in a movie, it must be true right!?

One way or the other, this stereotypes are great possibility and reason for the ‘truck driver not welcome at Walmart sign’ that go viral last year!

These are not true, or at least aren’t as negative as some might label them, but they are the general image on all those working in the trucking industry.

Unfortunately many are unflattering and most don’t apply. Actually most might apply to every industry. As you read through these see if they might fit anyone.

Watch any movie or listen to any conversation and truck drivers are present as unskilled, uneducated, uncouth, often overweight, country/redneck, dirty, foul mouth, and aggressive. People see them as womanizers and as doing something anyone can do.

But that isn’t true. Many have degrees and other education. There are numerous Veterans who are now truck drivers. Truck drivers come from all walks of life, the country, the city, male and female!

They represent every race that lives in America and are truly an excellent representation of this great nation.

Furthermore, it takes a lot of skill to drive a big truck and to maneuver them into some places customers call loading docks.

Not to mention dealing with the weather (especially driving in winter) and other drivers. Let’s not forget understanding all the federal, state and local regulations.

It is funny that there is such a negative stereotype on one side when so many respect truckers! Often people say that truckers are some of the best people. They are quick to assist, friendly; there are some highly experienced truck drivers that have a lot worldly knowledge you can’t get from a book!

Truck Drivers Not Welcome at Walmart – 10 Terrible Reasons was last modified: May 4th, 2017 by Jurica Magoci