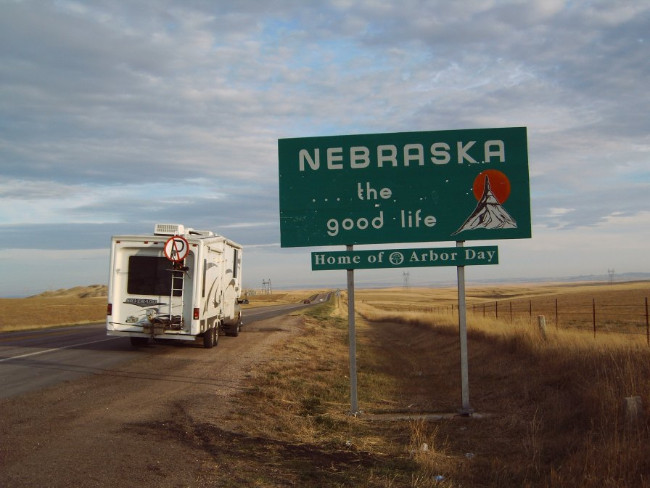 The Nebraska Territory officially became the 37-th state in 1867. You might find it hard to believe but they once actually referred to Nebraska as being part of the “Great American Desert”!

This is because in 1820, Major Stephen H. Long considered the area to not be fit for human habitation (though his words were even a bit harsher).

This is due to the fact that the area at the time was hot, dry, rather flat, and home to few trees. The area is not a desert, but does resemble it in some places. It can get very hot and can have severe blizzards. But it is also beautiful with a lot of natural wonders to see, if you’re into that.

Of course times changes and we now refer to the area as the Great Plains. This region stretches from inside Canada down to almost Mexico and includes part of ten different American states. They are North Dakota, South Dakota, Montana, Nebraska, Wyoming, Colorado, Kansas, Oklahoma, New Mexico and Texas.

Like every state Nebraska has several interesting facts and places to see, way too many to list in here! But for example Nebraska got its name from the Oto Indian word meaning “flat water”.

Like I said Nebraska is home to many important things, you can always read them up but here are a few things that came from Nebraska:

They are also famous for such things as:

Now they also have some significant of facts. With one of them being most important to the trucking industry, it relates to their highway system.

The National Interstate and Defense Highways Act of 1956, was passed into law by President Dwight D. Eisenhower. Nebraska was proud to be the first state to complete their portion. A four lane highway that consisted of about 455 miles, this was finished in 1974.

Since then Nebraska has built and/or improved numerous roads and highways. These cut all across the state the most common is highway 80, which runs east and west.

Like every states, they have a large number of other routes, interstate, Nebraska state, and county roads. These are a great help in getting freight from one side of the nation to the other, or even just to the local markets.

If it looks like you’re going to be in the area than you might want to check out a few helpful resources.

The Nebraska Department of Roads (NDOR) offers a lot of great travel information as well as links regarding their requirements and regulations (such as weights, permits, and such). Also the Federal Highway Administration (FHWA) always offers some helpful information.

Now if you will be doing business in Nebraska you’ll want to find out whom you can work with. So here are the top 10 trucking companies in Nebraska that I’ve choose for you today.

Everything started back in 1973 when the owner of Nebraska Transport Company had only one truck and a big desire to make the company different and better then the competition.

Since then till now, this company stuck by that vision, the founding spirit and core values on which was build, and has grown into the team of professionals that they are today.

They count for one of the best trucking companies in Nebraska and a premier Midwest regional less then load (LTL) carrier.

NTC offers progressive transportation solutions and value-added services to its customers. They proud themselves with their team of dedicated professionals which are working hard and with full speed, to serve and to satisfied customers needs.

Nebraska Transport Co very much deserves the place among some of the best trucking companies in Nebraska. They have terminal locations and operate in Grand Island, Lincoln, North Platte, Omaha, Scottsbluff, as well as, Denver, Des Moines, Kansas City.

H&M Trucking was launched back in 1987, and it is among the best trucking companies in Nebraska.

They originally started as just a regional company focused on transporting grain and brokering freight to other mid-west carriers.

Later on, after they’ve added additional equipment and wider range of services, they’ve become a nationwide, asset based service and over the road trucking company providing full service transportation and logistics.

Over the past 25 years their main goal and responsibility was to build better and more successful trucking company – a company that you can count on when it comes to transporting loads in a time efficient, professional and safe manner.

Today, the company has fleet of 200 trucks and double that driver. The people that work in H&M Trucking are dedicated and committed to meet the growing needs of their customers.

They are striving to becoming better in every aspect of their services including maintenance, dispatch, safety rating and overall safety, accounting and hiring the best drivers out there!

H&M Trucking is based in Omaha, Nebraska and as one of the best trucking companies in Nebraska keeps helping the industry and the community.

This company is a family owned and operated business, which has been serving customers since1989.

They are efficient; industry leading bulk liquid carrier that pride themselves on providing the highest quality liquid transport services in US and Canada.

Top 10 Trucking Companies In Nebraska was last modified: May 4th, 2017 by Jurica Magoci