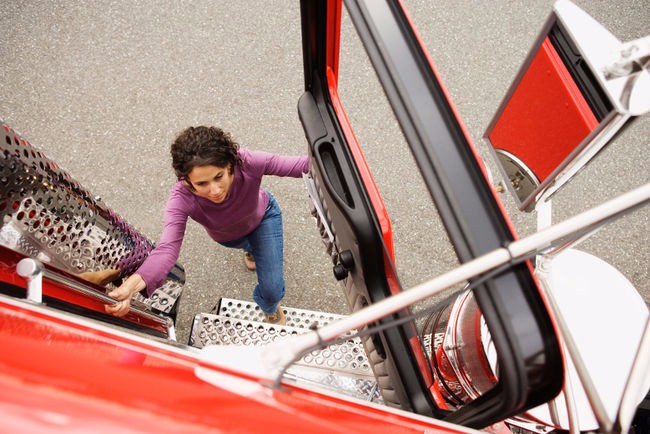 Did you know that there are female truck driver opportunities as well? The number of women having a career as a female truck driver increased since 2013. Additionally, when a woman enters this so-called “man’s world”, they are considered as incapable of doing this job.

On the contrary, what these types of people are missing is that they are unaware of what women are capable of doing. Not to mention that women are only considered as suitable to be hired as a dispatcher.

Identically, there are situations where a female truck driver applies for a trucker and the interviewer is convincing her this job is not for her. Well, not in this world, not anymore.

Although some people’s assumptions were that truck driving may die as an occupation in the following years, on the contrary, it continues to rise. Additionally, it spread so quickly among women, like a virus. Every month women are choosing the female truck driver profession.

You may think that truck driving is a man’s world only but women are ruling it. They may even be better than men drivers. A female truck driver can be any woman who is smart, organized and knows how to handle a tough situation.

I can’t help but wonder, why a female truck driver is important in a trucking company?

Even though trucking is considered as a man’s world, woman’s power prevails everything. And just when you thought that there is a profession left only to men without a woman in it, feminism strikes again.

The importance of a female truck driving in every company is of a significant importance and there are reasons for that. Women respect the administrative law more, they care about safety and they care about their trucking company.

Trucking is a risky profession and dangerous for every truck driver, especially for a female truck driver. Any women who are courageous enough to be in this business has fear of something. When it comes to training programs, women face an issue where men’s behavior is unacceptable.

There are cases that have poor training programs in order to prepare candidates in qualified truck drivers. There is a certain number of a female truck driver which faced several issues with a male trainer:

Each three of five women come across certain difficulties when it comes to training. Facing these unacceptable behaviors, a female truck driver needs to be trained by a male trainer. However, there are negative thoughts about same-sex training programs by some judges.

Even with this in question, a female truck driver is protected by the Surface Transportation Assistance Act (STAA). Therefore, due to this reason and despite the judgments, female trainees should be trained by other female trainers.

Thus, they will avoid all the harassment and will be given proper training, otherwise, their wish to come to a truck driver is in vain. This is crucial because there are females who are afraid to report unethical behavior and those that are, may be blackmailed.

The National Institute for Occupational Safety and Health (NIOSH), states that many truck drivers do not take care of their health. Not only male but every female truck driver as well does not pay much of attention to it. They are not cautious, and honestly, they hardly get the chance to pay attention to health.

However, the tenacity is key when it comes to accomplishments. Furthermore, it is the same with truck drivers. For instance, whenever a female truck driver sees a truck stop amenity, it should get the chance to make a stop.

There are women who are prone to leaving this job with health consequences:

These symptoms are as a result of the poor places for health care or insurance coverage. Consequently, this leads to ignored symptoms and self-medication which leads to health problems.

First, according to the U.S Department of Transportation, the economy or the life of other depends on a truck driver’s delivery. If she happens to have one of these health problems the transport of materials may be delayed. Thus, she can cause problems to her trucking company and herself as well.

Having to deal with menstrual cycles is hard. There are women which have more painful menstrual cycles than others. They may be preceded by headaches, stomach aches, and kidney pain. Furthermore, what is even scarier, an intolerable pain may lead to unconsciousness. These symptoms are only present on the first day but there is a way to keep yourself from unwanted situations.

Therefore, the most acceptable thing to do is to avoid strong pain killers. Furthermore, it must be remembered that strong pain-killers may lead to falling asleep. Thereupon, if you are in this cycle of life, it is better for you to take a rest at a truck stop than continue driving with your life at risk.

If you thought women cannot do a man’s job you were most certainly wrong. Nowadays, every woman can do a job meant for males. Is it the same with men? Women have used their superpowers again!