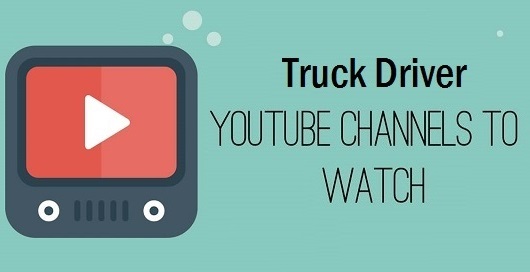 Half of the population, including truck drivers, have seen at least two videos of the channels on YouTube. Some of the truck drivers going online are found helpful while the others are considered as engaging and funny.

Furthermore, what you will see on the YouTube channels is the specific lifestyle of a truck driver. If you visit one of the channels you will be able to see their insights and humorous views of driving and trucking industry.

It is important to realize that not everyone can be a truck driver. Sometimes truck drivers work even 70 hours a week and that is a lot more than the average working hours. Thereupon, while on the road, truck drivers need to do something else besides driving.

It is important to realize that being a truck driver is not an easy assignment. For instance, there are drivers that are YouTubing themselves.

If you ask me, everything comes with the experience. For example, new truck drivers cannot start YouTubing themselves at the very beginning while they are still new in this job.

On the other hand, there are those truck drivers which are driving for years and have the possibility to think like an experienced truck driver. Additionally, those drivers are professionals and are used to doing several things at the same time, even putting videos on truck driver YouTube channels.

Since there are different types of truck driving jobs, you can see them all in their own versions of themselves and their careers.

On the other hand, they differ in the freight and goods transport as well. No matter what kind of goods they are transporting they are always brave, even on the scariest highways. In addition, they are always there, to help you in a tough situation on the road.

Truck driver YouTube channels offer information from all kinds of truck drivers that other truckers may find useful in the near future.

Some of them are giving counsel about the freight they transfer, while others are talking about the money savings etc. If you open one of these truck driver YouTube channels, you will see different kinds of counseling.

For instance, you can learn some helpful pieces of advice and secrets from each and every kind of them:

Although these truck drivers have different responsibilities, they have one thing in common – they are brave. They are strong and learned how to handle the upcoming situations themselves. Although some of them are driving small routes and others are long haul drivers, they offering their help with their truck driver YouTube channels.

The Dark Side Of Trucking And YouTubing

For example, there are truck drivers that are videotaping themselves while driving. However, not every time is the smartest thing to do. If you look on the negative side, there are few disadvantages of truck driver YouTube channels.

Why am I saying this?

Furthermore, there are other situations which can cause problems with truck driver YouTubing channels and can result in putting their career at risk. Moreover, they can even put the reputation of the trucking company at risk.

To begin with, some people are unaware of the function of the internet and the exposure on it. For example, there is a truck driver who YouTubed himself saying bad things about a dispatcher. Another example is, there was one driver who said bad things about the trucking company he worked for.

Although there are many benefits, there are few cons that are not letting the YouTubing and sharing guidances be considered as a benefit only.

Hence, there are those types of roads which are known as the most dangerous roads and you need to stay focused. On the other hand, there are ice road truckers, driving in the cold, icy winter weather and still videotaping themselves. However, they are called professionals.

The Bright Side Of Trucking And YouTubing

“Always look on the bright side of life” is not only a statement but it is also true.  Even though there are few disadvantages of trucking and YouTubing, the truck driver YouTube channels also have some numerous benefits as well.

On the contrary, if you look on the positive side, with this one can only prove how amazing job truckers do on a daily basis, for months, even years. To point out, they are smart, multitasking creatures, moreover, they are our heroes.

The idea of showing their occupation on YouTube channels is to show the world that life is beautiful no matter what you do. Further, it is important for you to learn to love your job.

Those heroes that are hurrying to transport the essentials in every day’s life, the economy profit and those which are moving America forward, are our heroes. Besides being awesome in their job, there are numerous truckers included in the truck driver YouTube channels.

They are YouTubing themselves in order to show a trucker’s life to the world. They want to show all the beauty that comes from it and transfer their positivity to other truck drivers and their so-called fans.

Their personalities are so strong that they are first motivating and pushing themselves forward and then they start motivating their viewers.