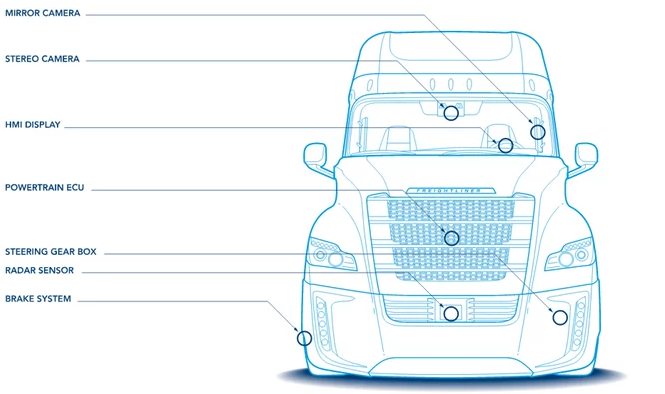 It’s always been like that. Some of the hardest work used to done by humans are, thankfully, replaced by machines.

But what if the new solutions result in marking too many workers as technologically sufficient? Are those workers doomed to abandon their professions? Can economic efficiency always justify social problems?

Many questions are there to be answered, and trucking industry is about to face those questions when self-driving trucks hit the roads.

Before we jump to conclusions, let’s analyze this potential issue, and figure out what it can mean for trucking industry, US economy and society.

How the Self.driving System Works

The automated system called Highway Pilot is driving the truck, while the driver is (still) behind the wheel.

Self-driving truck allows the driver, to hand over the control of the vehicle. It has to be under proper condition regarding traffic and environment. 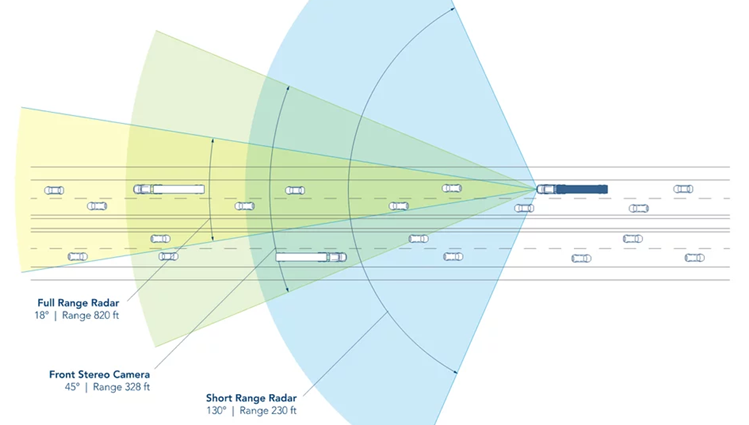 Short-range radar is assessing truck’s surroundings up to 230 ft away and 130 degree arc up front.

The stereo camera will be used for identifying road markings and manage steerings.

The driver can take over full control instantly, just by moving the wheel of tapping the pedal.

When are Autonomous Trucks Expected?

Don’t worry, it’s already here. The Freightliner Inspiration got licence to use public highways of Nevada for this matter.

Still, these are testing models. Daimler expects advanced version of the system to start in middle of next decade withe the Future Truck 2025.

“If the legislative framework for autonomous driving can be created quickly, the launch of the Highway Pilot is conceivable by the middle of the next decade.” Wolfgang Bernhard, member of Daimler’s Board of Management.

What about other companies?

After Daimler’s presentation, response will surely come. I wouldn’t suprise the competition bring autonomous trucks on the roads sooner than expected.

This is pure speculation but Royal Truck & Equipment already developed truck that will be used for highway construction in Florida. It’s not what Daimler offered, but more headlines like this are about to come. No question about that.

Both truckers and public travelers safety is in the heart of every the government’s actions related to trucking industry. Therefore, approving this technology will have to bring more safety on the roads.

It’s claimed that autonomous control will help in:

“Self-correcting sensors in the truck would compensate for minor disturbances and let the driver relax.”
Nady Boules, ex-worker at General Motors

Self-driving trucks will be operated through software, which will allow faster driving and getting closer to other vehicles using them as the wind shields.

The trucks will be hooked together with electromagnetic sensors. According to the Verge, this convoy driving will use 10 percent less fuel.

Same thing was stated at Freightliner video presentation, where they explained how the platoon system works.

Current solutions are not replacing the drivers. A driver will control the wheel whenever he wants to, including the time when automatic driving is turned on.

Autopilot would replace the driver on the long boring routes, while he or she takes some rest.

When it comes to managers of trucking companies, they should keep putting all efforts in keeping drivers and finding the new ones.

“Chances are, if you are a company waiting around for driverless trucks, and not focusing on getting more drivers, and paying them more and making them happy, you’re going to be out of a business”

Anybody who had ever hit the road, knows the driving is just a part of drivers work.

Now, big part of that work can’t be done, or it’s incredibly hard and dangerous, during the driving. That’s the moment when self-driving would be most useful.
All this can save time, improve security of everyone, make the driver more satisfied and consequently more productive.

Now, while advocates of automated driving claim the safety improvements, not everybody share that opinion.

One of the reasons doubts lies in the fact that drivers would have more time for distractions such as mobile phones.

Let’s not forget that mobile phones are involved in more than 25% vehicle crashes, which makes these doubts more than justified.

In the USA, the highest number of lost lives is on the highways. Annually, 4,000 deaths are results of the large truck collisions.

The true risk usually comes from the biggest strengths. That could be case in self-driving technology.

What do I mean by that?

Well, since the software is planned to replace the driver’s, it also means that theoretically it can be compromised from the other side of the world.

Eddie Schwartz from Verizon’s enterprise said for the Guardian that cyber-security is a long way from maturity, and the first half of 21st century will see the number of targets increase exponentially.

He highlighted a million applications designed for machine-to-machine communications with potentially a million underlying security issues.

Relevant institutions will surely deal with these questions, but trucking industry is far too important to avoid the publicity.

What about suddenly unemployed workers?

According to BBC’s article, significant knock-on effect for employment is expected if the new technology make a breakthrough.

Innovative Self Driving Trucks : Tehnology and Consequences was last modified: May 4th, 2017 by Jurica Magoci