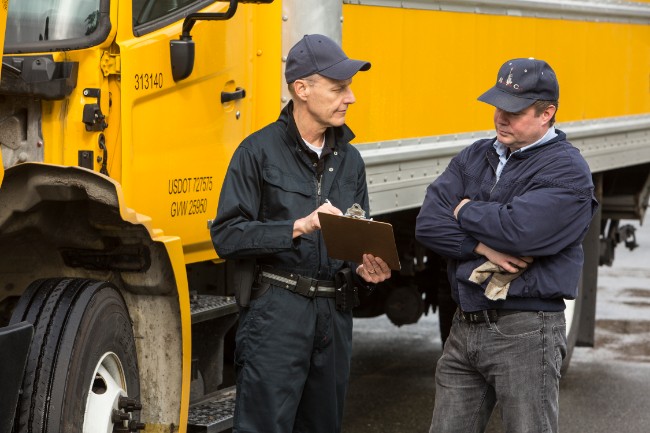 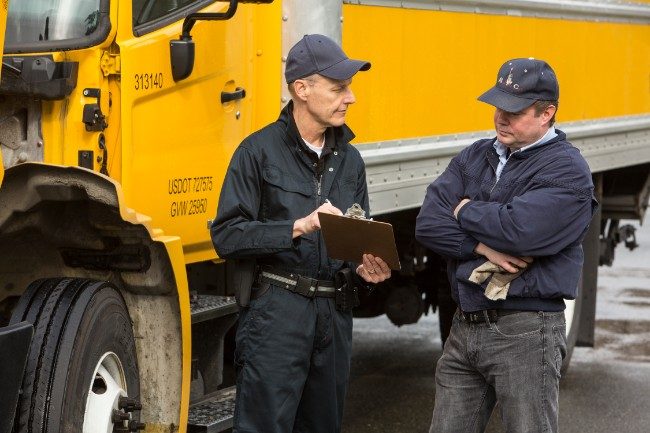 DOT inspection can mean a great deal of stress, regardless how calm and experienced truck driver you are.

You shouldn’t fear the DOT inspection, if you are doing what you are supposed to be doing!

I know its easiest said than done, but if you obey the rules and regulations, than there is nothing to worry about; or better said less things to worry about!

First of all, being in the trucking industry means a lot of rules! Period!

Regardless if you are a broker, dispatcher, experienced truck driver or a rookie, trucking company owner, or hold some role in the management or logistics, you still will need to comply and obey with the numerous agencies rules and regulations, with some of the main ones being the Department of Transportation (DOT) and the Federal Motor Carrier Safety Administration (FMCSA).

Furthermore, all already involved in the trucking world are very familiar with these agencies but for the one that are new, here is a short list of some of the more important ones that you will interact with in your driving career:

Same like there are good and bad employees in any industry and any professional group in matter of fact, the DOT inspectors are also known to have some good and some bad individuals assign to do the job.

As I said its all individual, but some of these DOT officers see their job as chance to hold power, while others see it as a way of helping to make the industry safer!

Some of them are better than the others, and they concentrate only on the major safety issues during the vehicle inspection. While on the other side, others will look for “needle in the hay” and penalize you for a minor violation without even asking you and giving you the time to correct the problem and improve.

If the infraction is minor though, there is beter chance that you will not have a big hassle.

Even if you are in the wrong for one thing or another, if you cooperate with the DOT inspection officers, they might have better understanding for you.

However, their attitude will slightly depend on many circumstances, as well as the rules of the state they work for.

One thing is sure thought, and that is the fact that you will have to have a DOT inspection on a regular bases. That’s for fact, regardless how that make you fell!

You can choose if you are going to wear a big trucker hat or not. Further, you can choose which fuel transfer tank to use, and which Freightliner dealers you like.

It’s up to you to choose many things in life, but when it comes to DOT inspection, same like with the DOT physical examination, there is nothing to choose! You have to have it if you want to drive a truck, and that’s it! It’s a done deal!

This is not one of the biggest USA trucking secrets, it’s a fact that the DOT inspection is MUST, same like is a fact that we can’t by pass it! So why not try to make the best out of it!

Yet again, there are some DOT inspection officers that are set out to write as many tickets as they are able.

I am sure you’ve met at least one or two tough inspectors during your driving career, and if you don’t, then consider yourself as a lucky one! But your turn is yet to come, because you will meet them one day! That for sure!

Recording to media sources, some states and provinces perform a DOT inspection on a quota basis.

So, with other words, the inspectors are mandated by their various state or provincial governments, to inspect a certain number of trucks and issue a certain percentage of violation tickets.

And here is from where the harsh DOT inspection occurs, and the tough inspectors come from. Is not that they are tough; it’s that they have to fulfill the quota.

On places and areas like this, it’s quite possible to get a ticket and fine for an infraction which ordinarily would have been overlooked and forgiven if you were at some other region. You just happen to be on the wrong place, in the wrong time! As simple as that!

Of course, you can take the issue to court and fight it, if you think that you were clearly not on the wrong, and your ticket is illegitimate, but the reality is that most of the truckers do not have spare time to waste in some court hallways. And the DOT officers know that!

The Compliance Safety Accountability (CSA) is a North American standardized way of doing commercial vehicles inspection, but it is important to know that those inspections can be modified by the various states and provinces.

The U.S. DOT Inspection and How to Handle It

So, the stiff rules, and enforcing the DOT hours of service rules are just part of everything that the DOT inspection need to do. Wait just few months from now when the ELD mandate comes in place. I can bet that it will be lots of frustrated people out there!

How to Handle a DOT Inspection Like a Boss was last modified: November 21st, 2017 by Jurica Magoci